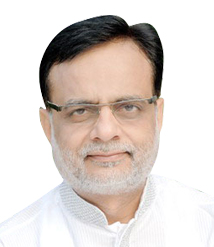 I am delighted to join Bank of Baroda as Chairman of the Board of Directors and it gives me pleasure to put my thoughts before you. In the last 112 years, from the time the Bank of Baroda was set up, it has been pioneer in the banking field and has a rich legacy of serving the society and the nation. As Chairman of the Bank, I remain committed to nurturing and furthering this legacy.

A robust financial sector is essential for the growth of economy. We need to grow at 8-9% consistently over years to catch up with China and other developed economies. Achieving this requires a concerted effort that maintains the reform momentum and widens its scope for arriving at a durable solution to banking sector issues

The Government has adopted a multi-pronged strategy to improve the health of the Indian banking system. It announced a recapitalization plan of Rs. 2.11 lakh crore in October 2017. As part of the above program, the government infused the second tranche of Rs. 1.06 lakh crore in Public Sector Banks (PSBs) in FY 2019. Capital infusion by the government has helped in improving the health of the Indian banking system and has led to an improvement in credit growth of SCBs to 13.2% in FY 2019 from an average of 10% over the three previous years.

Indian banks had seen a large increase in non-performing loans over the years. In order to ensure a faster resolution of non-performing loans, the government implemented a new Insolvency and Bankruptcy Code (IBC). Under this mechanism, there have been a marked improvement in cash recoveries of the banking system at Rs. 98,493 crore in the period April to December 2018. The IBC process has resulted in structural changes such as faster resolutions; higher recoveries and improving credit culture which is positive for the banking system in the long-run.

The strategy adopted by the Government, RBI and PSBs for recognition, provisioning, resolution and recovery of non- performing assets has commenced to yield results in the form of declining stressed asset ratios and improvement in cash recovery. The gross NPAs for PSBs are now beginning to see a decline. RBI has projected that the gross NPA ratio for the SCBs would fall to around 10.3% in March 2019 from 11.5% in March 2018. The slippage ratio has declined from 7.6% in March 2018 to 4.1% in September 2018. The Provision Coverage Ratio (PCR) has also increased significantly from the levels in March 2018.

Despite being the sixth largest economy in the world, India’s financial institutions lack scale and size on global scale.To be globally competitive, we need banks that are bigger and stronger. Large financial institutions have the ability to weather economic shocks and benefits of scale help them to provide banking services at a relatively lower cost. Over the years, various committees on the financial sector such as the Narasimham Committee (1998), the Leeladhar Committee (2008) and the Nayak Committee (2014) have recommended consolidation among banking sector and that of PSBs

During the year, the government announced first three-way amalgamation of Vijaya Bank and Dena Bank with Bank of Baroda as a step towards achieving the above objectives. In terms of scale, the combined bank which came into operations from April 1, 2019, is now the second largest PSB in India. The consolidated bank has over 120 million+ customers across the globe through its network of 9,500+ branches and 13,400+ ATMs and 84,000+ employees. Our combined business mix now stands at Rs. 15+ lakh crore with market share of 6.4%. The amalgamation has provided an opportunity to build a world class banking institution for our stakeholders and we are determined to seize it.

Bank of Baroda – The Continuing Transformation

The Bank has undertaken a comprehensive transformation journey centered around processes, products, platforms, building people capabilities and improving compliance. The details of the actions taken have been detailed out in last years’ annual report. Given that the technology evolution is an ongoing process, the transformation has to be a continuing journey to ensure that the Bank remains competitive in the market place.

public sector banks. The capital adequacy ratio at 13.42% is above the regulatory requirements.

Given the transformation undertaken by the Bank over the years to build a Bank that is future ready, the amalgamation ensures that the benefits of scale and size are available to wider set of customers and stakeholders. With amalgamation becoming operative, the integration process is underway with a detailed plan on customer, employee, IT and process integration. We foresee this as an opportunity to build a world class institution for our customers, employees and other stakeholders. As the Chairman of the Bank, I am happy to be a partner in driving these efforts