When an experiment begins, the scientist hardly knows what the outcome will be. In a moment of adventure or necessity, the government put three men — PS Jayakumar, RA Sankara Narayanan and Karnam Sekar — in a boat and set them on sail into uncharted territory.

These men who head Bank of BarodaNSE -2.05 %, Vijaya BankNSE -1.53 % and Dena BankNSE -0.32 % may face many a storm and choppy waters in a journey that could in a few years make them either look like Christopher Columbus who found the new world, or land in no man’s land like Robinson Crusoe

When the numbers are put out on an Excel sheet, the easiest way to analytical glory, the merged entity is the second-largest by assets. But life on the integration ground is the opposite of what appears on the Microsoft Excel file. Mergers are probably the most glamorous in the world of business, but history is as much about bitter divorces like Chrysler-Daimler as they are about romantic rides like Procter & Gamble’s with Gillette.

As with most marriage proposals, there’s optimism about this too. “I look at the merger positively,” says Aditya Puri, chief executive officer of HDFC Bank, the most valuable lender. “I think it will lead to cost, product and technology efficiencies. It is easier to manage.”

MAMMOTH TASK
The task at hand for the three men is of monstrous proposition. In any merger, the biggest challenge is that of personnel. While in the private sector, the easiest action for the management is to lay off people to derive cost savings, that option does not exist for the three CEOs. There are 90,000 staff whose future has to be protected and concerns addressed. 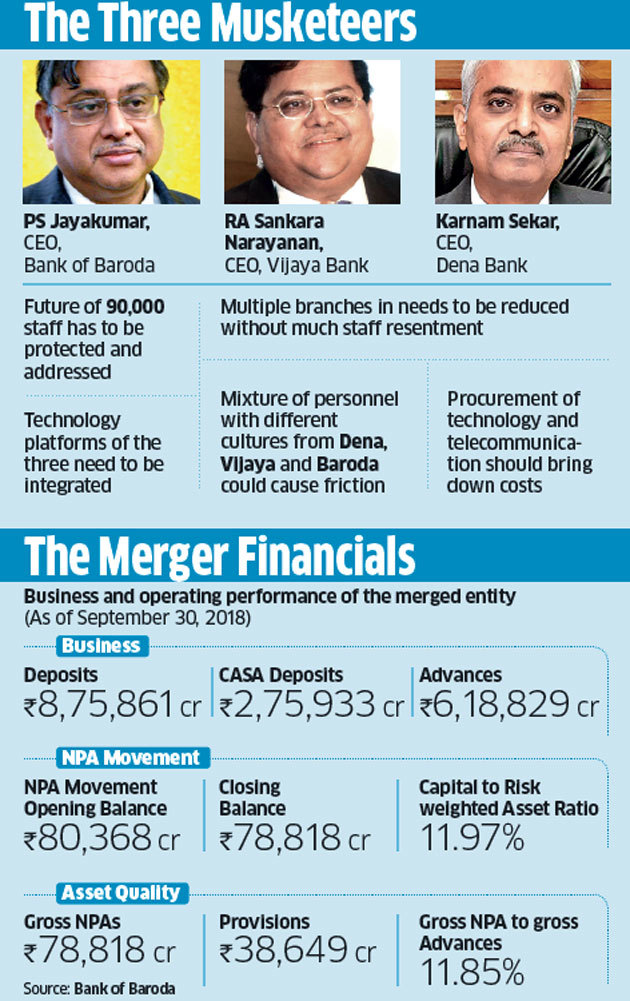 “There are three top reasons for the failure of any merger, one of them is the way HR gets integrated,” says PS Jayakumar, CEO of Bank of Baroda, the biggest of the three. “We are very conscious of this. But there are some commonalities as well… like interview processes are similar, owner is similar, organisation structure is the same kind, so there are a lot of things that are common as well.”

There are multiple data centres that handle more than 10 crore customers across three banks that need to converge. For the moment, the three banks operate on three different technology platforms which appear to be easy to integrate but difficult to execute. “Technology integration in theory is easy to achieve but in practice it will require a lot of hard work like just getting a new account code for all customers and communicating that will not be a simple thing,” says Jayakumar.

“Replacement of cheque books will not be simple. RTGS, NEFT details and net banking interface will take time to change.” The merged entity will have about 9,489 domestic branches which looks like a great leap forward, but of this nearly 10%, or 941, branches are in the same pin code, which needs to be reduced without much staff resentment.

THE SYNERGIES
One of oddities of Indian banking was a single owner, the government, dominated nearly 80% of the industry which is near monopoly, but the problem was it was spread over 21 different entities that neutralised the advantages, the dominance would have brought it. “Why do you need so many banks with the same parentage competing against each other, killing each other in terms of under cutting etc.?’’ says Ravneet Gill, CEO, Deutsche Bank, India.

Because of the single owner, the incentive for different entities to compete strongly and innovate did not exist either. Whatever each bank achieved, it was more an enterprise of individuals rather than any institutional vision. While the mixture of personnel with different cultures from Dena, Vijaya and Baroda could cause some friction, the advantages that would flow are many.

“It will give them more job opportunities so that there is no shortage,” says HDFC Bank’s Puri. “Given the retirement that is coming, there is going to be a shortage of manpower. If you merge these three, then you don’t have to have layoffs and it automatically brings in cost efficiency.” Handling of staff would determine whether they become an asset or a liability, but the existence of so many overlapping branches like BoB’s first Mumbai branch in Horniman Circle, a century old, that sits opposite sprawling Dena’s

These could be merged and allocate excess staff to suburbs, probably closer home. In Maharashtra alone, the merged entity’s branch network would rise by 400 to 950. Cost-cutting could be huge. In fact, BoB has already proven by reducing the number of auditors to just about 30 from nearly 1,400. In the merged entity, the procurement of technology, telecommunication could bring down costs.

“We just need to ensure these synergies get captured,” says Jayakumar. “We have to have a clear plan on how to do it but also some patience. There may be short-term pain but the long-term gains will not take far long to manifest themselves.” State Bank of India’s merger of five associates with itself and ING Vysya’s merger with Kotak Mahindra Bank are recent examples that these three could draw from.

While the size of integration of SBI associates was mammoth — almost merging ICICI Bank with SBI — the combination of ING Vysya with Kotak shows the challenges. A top Kotak executive involved with the integration then, Mohan Shenoi described the process best. “The merger process, according to me, was like servicing and upgrading an aircraft while it is flying,” Shenoi told ET in an interview last year. “So, we had to ensure that business as usual should go on, not on one side but on both sides.”

Kotak faced issues of staff integration and had to create a bad bank to dispose off the defaulted loans. It also had to take a knock on pension provisions.

DIFFERENT STROKES
It is a merger of banks from the same stable, but there are strengths and weaknesses that would play out and complicate as well. “A lot is riding on the success of this merger because a failure will mean that this whole consolidation process will be put on the back burner,” said Gopal Jain, managing partner at private equity fund Gaja Capital, which was one of the earliest backers of RBL Bank.

Over the past three years, Jayakumar along with former chairman Ravi Venkatesan had initiated a lot of changes, including lateral hire, changes to human resources policies that prioritise merit. Its leadership programme focused on enabling technology absorption along with refurbishment of branches into paperless offices and ending the steel cupboard culture are a welcome relief to both staff and customers.

“BoB has gone through a transformation,” says Vikramaditya Singh Khichi, executive director at BoB and a former Dena Bank executive. “The systems and procedures have been set to lay out a path going forward. This integration part is now going to move in only the direction BoB is moving.” Vijaya and Dena are small and saddled with bad loans, but they come with strengths too. Vijaya is retail focused and profitable and was the only state-run bank that paid dividends last fiscal.

Dena though in Prompt Corrective Action with restricted lending, has a portfolio of small and medium enterprises that could be coveted. “Bank of Baroda will remain on course with the strategy set in the last three years… it’s working well and we have to do more to accomplish the goal,” says Jayakumar. “As we get our programmes together, there will be good success- transfer opportunities so that we will end up with an institution that is more than the sum of its parts.” The government’s experiment has just begun