MUMBAI:
The Union Cabinet on Wednesday approved the merger of Vijaya Bank and Dena Bank with Bank of Baroda (BoB) which will create the country’s second-largest public-sector lender after SBI.

The amalgamation will be the first-ever three-way consolidation of banks in the country. Shareholders of the merging banks will receive Bank of Baroda shares. While 1,000 shares of Vijaya Bank will fetch of BoB’s, a similar number of Dena Bank shares will get only 110 of the acquiring bank. The swap ratio was announced by BoB following a board meeting on Wednesday. BoB shares were down 3% of Rs. 119, while those of Dena and Vijaya banks were flat at Rs. 18 and Rs. 51 respectively. Analysts believe that BoB will have to bear the pain of the merger, which would include fair valuation of assets and the cost of integration. 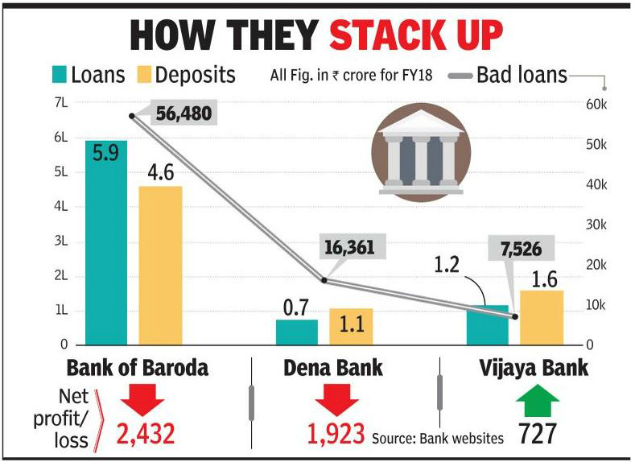 The merged bank will have a loan book of over Rs. 7.8 lakh crore, 9,475 branches and a network of 13,544 ATMs. The government said the merger, which is effective from April 1, will bring a host of benefits.

It is, however, unclear how the new management structure would evolve. BoB CEO P S Jayakumar, who completed term in October 2018 was given a one-year extension by the government ostensibly to oversee the merger. Vijaya Bank MD & CEO R A Sankara Narayanan’s term ends next January. Karnam Sekar, who moved from SBI to head Dena Bank, has the longest residual service among the three CEOs – until June 2020. One proposal that the government considered to reduce the disruptive impact of the merger was to retain the operations of the two merging banks as business units with their original business name for branch outlets with eventual amalgamation.